Baseball is a religion.

I mean it even has its own prayer.

God grant me wisdom,
to tell a strike from a ball,
to know where to throw
and never to fall.
Keep me always in the base line,
running straight and true
and I’ll look for your sign,
to stretch one into two.
God give me vision,
to see every pitch,
so if a player needs help,
then I will see which.
Let me always hustle,
so I’ll be at my best
and take pride in myself,
in sports and the rest.
God be my strength,
when I throw the ball
when I’m far from home plate,
or against a wall.
So I never miss a base,
please guide my feet,
bring me home safely,
so my job is complete.
When I help younger players,
let me always give praise,
so they’ll see you in me,
in all of my ways.
God please guide our coach,
to be fair and smart,
to teach us to be good,
let it come from his heart.
Let me take a loss,
just as well as a win,
to do any less,
is surely a sin.
As long as I can play,
let me make my parents proud,
as proud as I am,
when they yell MY name out loud.
However my games end,
let me always have fun
and if Heaven has All Stars,
I want to be one.
When my games here are over
and my seasons are done,
let me play on your team.
just like your son.
Amen.

Some are born in to baseball families. Baseball is engrained in to their hearts and minds from the womb. Their first word is ball, they learn how to tie shoes on their cleats, and they bring their tee ball gloves to big league parks to watch their very first heroes. They hear phrases like:

and plenty others more than they hear their own voice. Baseball indoctrinates them, shapes their thoughts, and carves their sub conscious minds.

There are others that are not born into devotion, but rather find it along the way. Sometime in their young age they are drawn to the connection of the sport. Someone shows them the light, and they begin to slowly convert their family. Later on down the road one would never tell they weren’t original believers.

For others it takes longer. They observe from the outside, learning every detail and breaking down every situation. They see the passion and understand the culture, but their not ready to give their hearts to something so enticing. Until one day, they see something unimaginable. Something so absurd, yet so magnificent that they can no longer run from what has been knocking on their heart for so long. Something like 2004. The Red Sox meeting the Yankees for the 2nd time in a row in the ALCS and losing the first three games of the series. Then, watching them come together, battle back, and win the next four games to take the AL Pennant. If that didn’t get them off the fence, watching them take the next four games to sweep the Cardinals, end the Curse of the Bambino, and win 8 straight post season games, would capture the heart of any lukewarm baseball fan.

And, then there are some who don’t understand and never will. Those who will fight with you about the truth of the game. Most of these people see the unity of baseball and because they do not understand it, their human instinct is to justify against it.

For those who take the baseball path, it’s full of tribulations to endure, lessons to learn, and blessings to enjoy. The baseball Gods take you through times you don’t understand. Times you can’t seem to get a break and find a hole or times you can’t even make contact no matter how much BP you take. Times you think way too much after one error turning it into another…times you can’t get out of your own head so you want to just take yourself off the field. But, then there are times when you are so amazed at your performance you just thank them, and make sure to wear those same socks next game.

At some point in the journey, whether player or fan, the frustration of the game is so piercing that walking away is about the only thing possible. Your love for the game runs so deep that the failure is almost too much to bear and you’re more angry at yourself for becoming so vulnerable than anything. So, you fall to your own thoughts and twist your mind into thinking you can move on…some stay gone and run from their own thoughts forever and some eventually mingle their way back, sometimes even unconsciously.

On May 17, I witnessed the beginning phases of being baseball religious. I had the opportunity to visit Beaumont, Texas. I’m sure Beaumont’s not on many peoples lists of exciting places to see. Let me tell you if you haven’t visited there…you’re not missing out on anything…except Lamar Baseball. Granted, college season has ended, this is a group of guys who can play and are definitely entertaining to watch. I’ve now been to three of their games and been impressed every time. I’m lucky enough to have a ball signed by the team and I feel special! #PeckEm

But, what was so special about the game on the 17th was the little fans. The place was crawling with little Cardinals. All of them were decked out in Lamar red and all of them wanted nothing more than to snag a foul ball. Even if a ball wasn’t even close to them they jumped out of their seats like they were on fire, had a glimmer in their eyes, and sprinted as fast as their little legs would take them. As soon as the promo team tried to give away t-shirts, they were bombarded by future Cardinals who stood below their eye level. One was caught off guard and before he knew it he had kid hanging on his left arm climbing to the shirt he was throwing out of his right hand. I even saw a little girl begging one of the players to for their autograph as he was headed to the locker room in between innings. Watching these children have so much excitement for the game brought me back to being a little girl. Baseball is something that even the smallest fans can understand. It is slow enough for them to know that when someone catches the ball or hits the ball,they should cheer. This age is where baseball starts to stitch itself in your soul. You have your heroes on the field that seem bigger than life and you just cannot wait to be big like them…to play like them. Going to a game is just as exciting as going to the candy store, if not more. As you grow up, you never forget your hero and what he did on the field…mine was Pudge Rodriquez. I remember watching him every game. He is the reason I fell so much in love with the Rangers. It’s the trials, tribulations, the celebrations and victories of these heroes that first grip our tender childhood emotions. Baseball steals our hearts and will never give it back…and thus we are forever pious.

Seeing these kids was refreshing and reminded me to always try to have the child like excitement for baseball and for life that we tend to lose too easily. Remember, always have faith in the game, and in yourself. 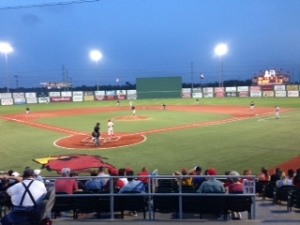 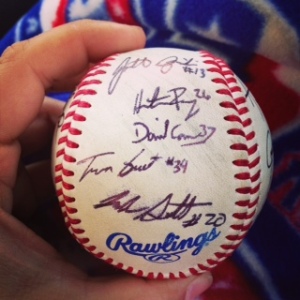